View cart “Electric Railways Around San Francisco Bay, Volume 1” has been added to your cart.

In 1901, Southern California was so vast and its population so dispersed, that Henry Huntington believed the only way to tie everything together was by an interurban electric railway system. He invested heavily in the San Gabriel, Pomona and San Bernardino valleys. He invested in orange groves in and around Riverside, and vineyards around San Bernardino. A tremendous period of construction began in 1902. Wherever the Pacific Electric cars went, subdividers and growth quickly followed. 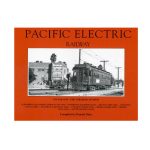