This pictorial history begins with the building of the Los Angeles Terminal from Los Angeles to East San Pedro, Pasadena, Altadena and Glendale. The Terminal became known as the “Route from the Mountains to the Sea” with its 43 train schedules. The Terminal was established by a St. Louis syndicate who wished to sell the railroad to a third transcontinental railroad.

This volume describes historically and pictorially the building and operation of both the Los Angeles & Salt Lake Railroad and the operation of the Union Pacific Railroad to 1990. Not forgotten are such famous passenger trains as the Los Angeles Limited, California Mail & Express, and the economy Challenger to name a few. Explained is the coming of such streamliners as the three-car M10000, the City of Los Angeles, the City of Saint Louis, and the City of Las Vegas. Learn about freight operations, the arrival of piggybacking and container service.

Accompanying the brief historical text are incredible photographs showing every phase of the Los Angeles Terminal, Salt Lake Route and the Union Pacific. It is all here in one volume.

The compiler of this volume on the Union Pacific is a name well-known to the railroad book industry. He established Golden West Books in 1960 to publish his own titles, but eventually began to publish other authors.

For Duke, research, writing, photography and publishing belong together. 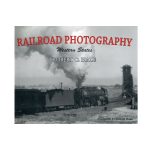