The Catskill Mountains, located on the west side of the Hudson River in New York State, had long been a barrier to trade between the rich farmlands west of the mountains and the river ports east of them. Thomas Cornell, a crafty Hudson River towboat entrepreneur, envisioned a railroad cutting through the heart of the Catskills to tap this traffic, forming a major connection with a north-south trunk line railroad.

The story of the Ulster & Delaware Railroad began in 1866 when Cornell’s Rondout & Oswego Railroad was chartered. Construction west from the port of Rondout was difficult and befre long the fighting among backers resulted in Cornell’s withdrawal from the project. After the railroad had gone through two receiverships, he resumed control of the line which reached Stamford in 1872. Cornell formed the Ulster & Delaware Railroad and rebuilt the line into a first-class route to the valleys west of the Catskills, with Oneonta, 108 miles from Rondout, as its final goal. Cornell did not live ot see his railraod completed, but his son-in-law, Samuel Decker Coykendall, completed his dream. The railroad was owned and operated by the Coykendall family during most of its life, until it was sold to the New York Central Railroad in 1932.

The effect of the Ulster & Delaware Railroad on the undeveloped region of the Catskills was incalculable. Its completion initiated a great era of hotel building. Many of them started as modest boarding houses to which New Yorkers fled seeking the cool mountains to escape the city’s fiery summers. By the turn of the century, the Catskills were dotted with hotels, large and small, creating passenger business for the railroad, to offset the poor freight traffic during the winter. The legendary haunt of Washington Irving’s Rip Van Winkle was again famous, and the Ulster & Delaware chose Rip’s picture as its official emblem. The completion of narrow gauge branches to Hunter and Kaaterskill and the simultaneous opening of the West Shore Railroad made it possible to reach any point in the Catskills by train.

Ulster and Delaware: Railroad Through the Catskills by Gerald M. Best presents the complete story of all the railroads of the Catskill region and describes the great hotels the railroads served. In pictures and text, it tells about the railroads’ construction, early operation, the famous passenger trains, and the steam locomotives. Included are descriptions of the Catskills, the sights along the line, special trains, the rolling stock, freight service, and the workings of the unique Otis Elevating Railway. This is an intensely human story of struggle and triumph in the New York tradition. 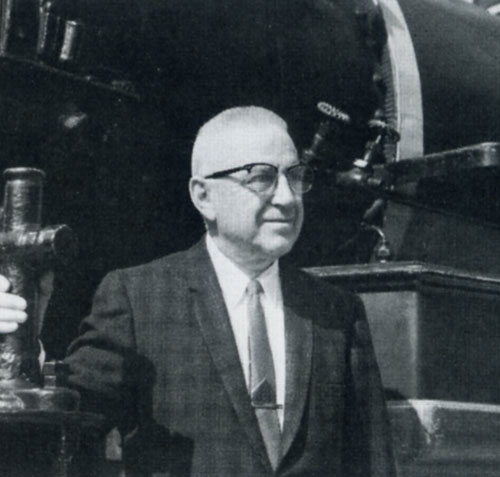 As a boy in Port Jervis, New York, Gerald M. Best developed a keen interest in railroads and the history of his home state. He first saw the Catskill Mountains from the train window while going from Port Jervis to Kingston with his father who was tracing the Decker family history and Samuel Decker Coykendall offered him help. Best came away with a lasting impression of a dignified, gracious man and little did he realize that half a century later he would research the story of the Ulster and Delaware Railroad, of which Coykendall was then president.

Gerald M. Best is a name well known among historians, especially in railroad circles. His writings about the steam locomotive and railroad history have appeared in many journals, his locomotive photographs grace the pages of numerous books.