View cart “Ulster and Delaware” has been added to your cart.

Northern Pacific Supersteam Era 1925-1945 by Robert L. Frey and Lorenz P. Schrenk tells the fascinating story of the development and operation of the Northern Pacific’s most powerful and advanced steam locomotives.

Main Street of the Northwest — a proud slogan for one of America’s most important transcontinental railroads — was an apt description of the Northern Pacific Railway. Begun as a national endeavor in the 1860s, the Northern Pacific opened vast areas of frontier land for settlement and industrial development. Its rails became a busy thoroughfare, crossing miles of open plains, rugged badlands and great mountain ranges, as it formed a link between the Great Lakes and the Pacific Ocean.

This book tells the fascinating story of the development and operation of the Northern Pacific’s most powerful and advanced steam locomotives. Making extensive use of the corporate records of the railroad, as well as interviews with former Mechanical Department employees, the authors document the life of the Northern Pacific’s trend-setting 4-8-4, 2-8-8-4 and 4-6-6-4 steam locomotives.

Northern Pacific Supersteam Era 1925-1945 by Robert L. Frey and Lorenz P. Schrenk is a book that will appeal to rail enthusiasts, railroad historians, students of locomotive technology and anyone else whose pulse quickens at the sight and sound of a giant steam locomotive. 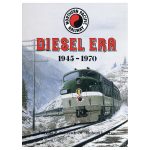