Features the Bay Area Rapid Transit, the streetcar operations of the East Bay Transit Co., the “Red Trains” of Southern Pacific commuter rail operation known as the Interurban Electric Railway, and the transbay services of the Key System.

An authoritative and richly illustrated work on an often-ignored subject in the world of electric service, Electric Railways Around San Francisco Bay, Volume 1 by Donald Duke is a must-have for the historian and fan of Bay Area electric railways. 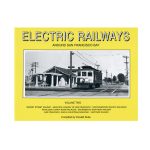