Beaumont Hill: Southern Pacific’s Southern California Gateway takes you trackside to witness the pageant of over a century of train operations.

Mountain railroading in Southern California has always been synonymous with names like Tehachapi, Cajon Pass and Beaumont Hill. While the two former passes have been the subject of several published histories, Beaumont Hill, Southern Pacific’s gateway to Southern California, from the east, has been largely overlooked. The publication of this book fills that void. After years of exhaustive research, John R. Signor presents the full story of over a century of history and operations at Beaumont Hill.

From its fragile beginnings in the 1870s up to today’s heavy double-stack traffic, every facet of Beaumont Hill’s long and colorful history has been explored. In the early days, learn about the desperate search for water to satisfy thirsty locomotives, of flash floods and sandstorms, and how the blistering heat affected day-to-day operations. Trace the evolution of motive power from the diminutive American and Consolidation-type engines of the late nineteenth century through today’s high-tech diesels. Follow the rise and decline of such name trains as the Sunset Limited, the Golden State Limited, the Argonaut, and the Imperial. Get the inside scoop on management decisions concerning double-tracking, signal systems, Centralized Traffic Control, and electrification.

Beaumont Hill: Southern Pacific’s Southern California Gateway takes you trackside to witness the pageant of over a century of train operations. See multi-engined freights charge upgrade, first, with the sturdy Consolidations of the early 1900’s, followed by the mighty cab-forward Mallets of the late steam era and finally on into the diesel age. See Kaiser ore trains struggle upgrade with 20 locomotives, alone. See the ponderous beet drags moving west from the Imperial Valley, and streamliners of another era – in black and white and in color. Not to be overlooked are the more pastural activities of the branch lines radiating out of Colton (including Pacific Electric’s electrified operations), and the agricultural oriented operations in the Imperial Valley and along the Inter-California Railway. Crisp maps detail the activities of places like Beaumont, Colton and Indio at their zenith, be it in the 1910s or the late 1940s. 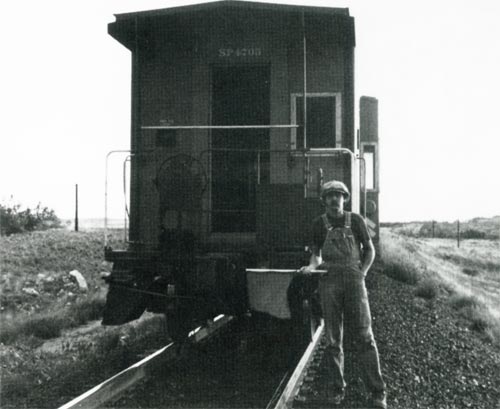 Growing up in Orange County, California, the author developed a keen interest in railroads and the history of his home state. A part of the Southern California railroad scene is the joint-track Tehachapi crossing and the author, in the company of friends, made his first sojourn to the “Loop” in the early 1960s. Two decades later, he made his conductor’s seniority date on the district aboard Southern Pacific’s Starpacer. Working for the SP and sharing an interest in railroad history has given the author an ability to probe deeply into the subject. Legend and lore handed down by his fellow railroaders blends easily with facts distilled from musty corporate records and operating statistics. The end result is a book of entertaining, yet definitive reading.

Tehachapi is the author’s second book on western railroading. Rails in the Shadow of Mt. Shasta was first published in 1982. In addition to his writing and railroad pursuits, the author labors as a freelance artist and cartographer. John R. Signor, his wife Julie and two children, reside in Dunsmuir, California.